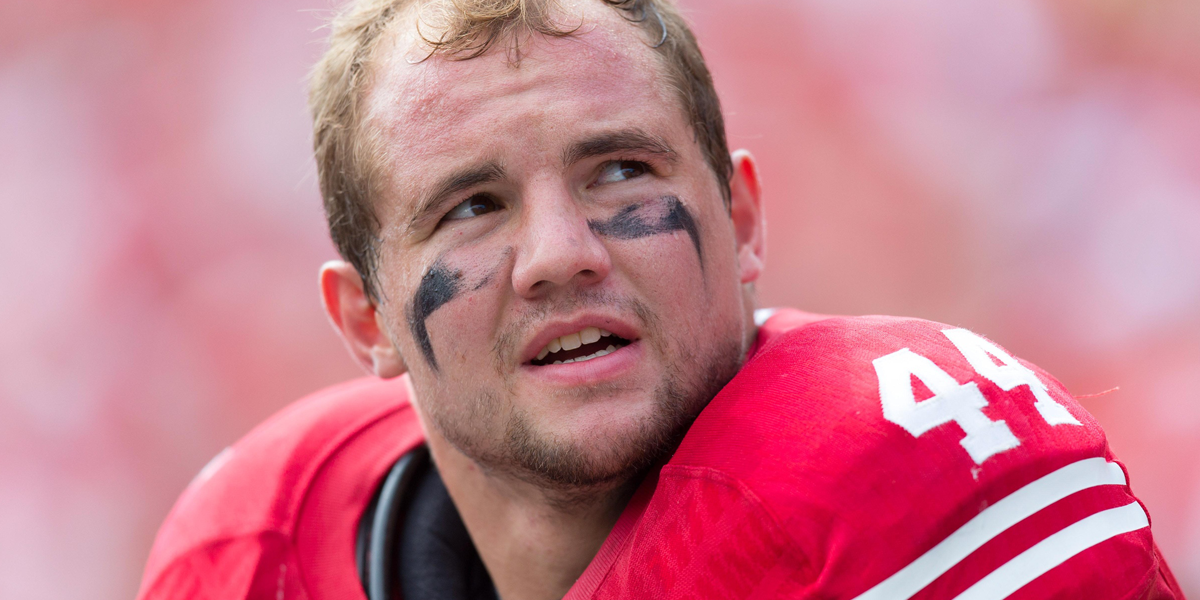 A few days ago, a young linebacker on the San Francisco 49ers, clearly destined to be a star player in the National Football League, hung up his cleats. Chris Borland, a highly honored University of Wisconsin player who had had a wonderful rookie NFL season, decided that the risks for his brain health were just too great to continue. Borland said, “I feel largely the same, as sharp as I’ve ever been. For me, it’s wanting to be proactive… I’m concerned that if you wait till you have symptoms, it’s too late. There are a lot of unknowns. I can’t claim that X will happen. I just want to live a long healthy life, and I don’t want to have any neurological diseases or die younger than I would otherwise.”

Many people reacted to his decision with dismay. “Quitting” meant throwing away millions of dollars in almost-certain compensation, and eschewing the accolades that could be expected to shower down for years to come.  How could any right-minded young person give up a dream job like this one?

It’s interesting to read the public reaction to his bold declaration. It came in several forms. There are those many individuals who argue that concussions are commonplace in all sports. “Life is full of risks.  What’s the big deal, anyway?”  They know someone who got a concussion playing soccer or hockey or riding their bike or water polo or playing ping pong.  Concussions are a part of any sporting life. Others argue that, since more than a million young children and adults engage in the sport each year, a small amount of risk is worth it for the joy it brings.

Like climate change, every citizen has a pretty strong opinion about this issue.  And alas, just like climate change, very few actually have any real understanding of the related science, so that most of the talk (especially on “sports talk radio”) is just so much talking through one’s hat.

Discussions about brain injury in football focus on concussive injury, but the problem is a greater one.  The average high school or college football player has more than 200 whacks to the head each year, each of which result in temporary low-grade brain damage.  A blow that induces a concussion is not stronger than many other head blows that have occurred in the same season.  While the neurological sequelae following a concussion are more serious, all of those other blows also count.  A brain scan taken from a player at the end of a season shows lots of evidence of changes, even when no concussion had occurred during that season. It might be noted that Chris Borland was an especially aggressive (wonderfully spirited) linebacker. A linebacker sticks his head into plays perhaps more than any other player on the football field.  Five or six or seven hundred times each year, their head is thwacked.  It’s a helluva lot to ask any human brain to put up with.  If you don’t believe me, let’s have YOU put on a football helmet and let me whack your head 600 times.  Then, perhaps, you should be able to honestly tell me (if you’re still capable of talking) that you cannot imagine how this could result in lasting effects.

For those with injured brains, it’s certainly worth mentioning that brains have shown to physically repair themselves over a period of several months of rest (the “off season”).  However, that does not mean that there may not be enduring losses, because brain blows cause connectional losses in brain networks that can only be repaired by new learning.  Without appropriate, targeted re-establishment of those lost connections, enduring losses can be expected to be ultimately expressed by (do result in) an earlier-than-otherwise-expected (or a higher probability of) onset of senility.

So is Chris Borland foolish for “giving up” a sport that he loves to play?  He said that he did some research about head injuries in football before making his decision.

Is there a future for American football? Here is where I have some good news for you. If we can establish strategies to more completely recover the brain from the functional losses associated with repeated head blows–which I believe is possible–then all of the very good things correctly attributable to a child’s participation in a physical sport like football might be rescued. As we learn more and more about how brain training can improve cognitive resilience (like physical conditioning improves physical resilience) we can apply our knowledge to solving this problem and enjoying football. This football fan is looking forward to that time.