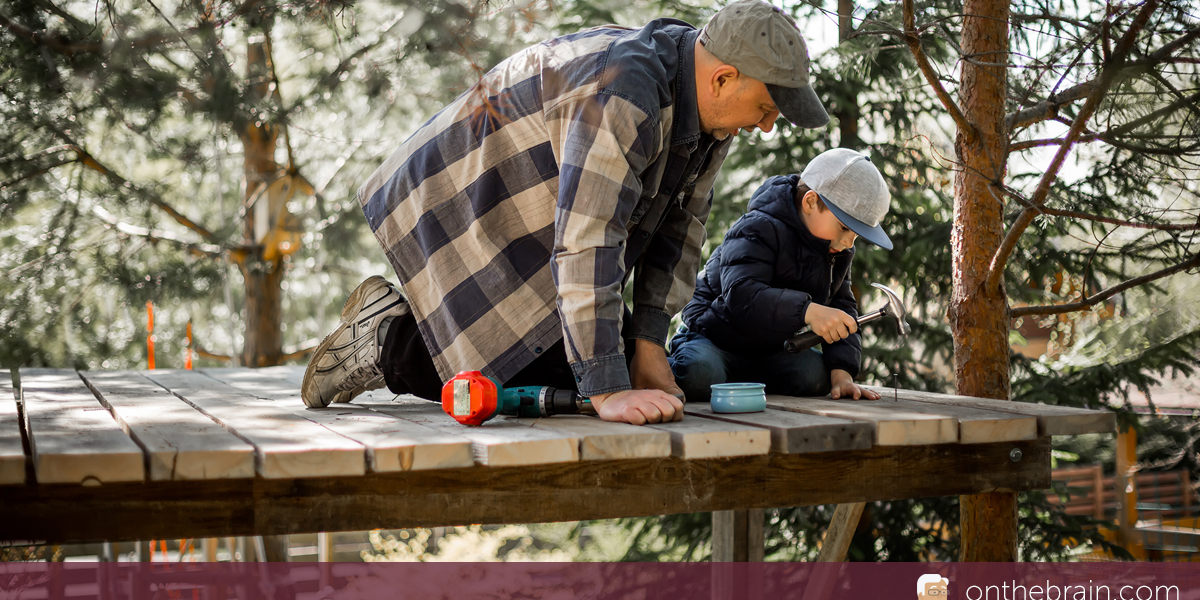 I spent much of the last two weekends working with my two sons-in-law constructing a tree-house for their children (Diane and my grandchildren). It’s a beauty. You enter tree-house paradise via a ladder (still under construction) that wraps around a large oak tree to deliver the kid to a notch that opens out onto a beautiful platform that ties together two magnificent old oak trees. A delightful slide runs off one side. Kids get onto the slide through a magical gateway formed by two large, parallel vertical trunks. Through another notch, you can enter (or exit) the tree-house from above, by first climbing up a net that extends from the ground up through the notch, than stepping down from the notch onto the platform. Future plans call for a net between two other large branches for a kind of in-the-sky hammock, a rope bridge to a small landing in a third tree, and a crow’s nest. Everything is constructed according to the strictest building codes, with all necessary safety features, with a secure railing that an elephant couldn’t break through, with beams supporting the platform and cables adding additional load-bearing security (supporting several tons of children, if necessary) that meets the highest standards of safety and aesthetics. It’s all constructed from redwood, with no chemical (wood preservatives, paint, etc.) applied that, in a modern, loving parent’s imagination could harm a child in any way.

When I was about ten years old, my siblings and I got the bright idea of building a tree-house. I vaguely remember asking our dad about it. He pointed to a board or two in a pile at the side of our garage and said that we should use boards of that type to tie the structure to the tree. I think that he also suggested that we use nails or screws of an appropriate gauge to fasten our “foundation” to the tree(s). I also remember him coming to look at our tree-house after it was “completed”. He was delighted with it. It was a ramshackle affair. The plywood floor was tilted. I don’t remember the platform having a railing. I think that we nailed irregularly-spaced 2×4 sections to the tree trunk so that we could climb up onto the platform. There certainly wasn’t any slide or climbing net involved â€“ although jumping off the platform on the soft ground below WAS an option. It certainly did NOT meet high standards of aesthetics or safety.

But it was OUR tree-house, and it was a DANDY!

As I was working on the final section of railing yesterday, I had the fleeting thought that building a tree-house for a kid is just about as wrong-headed as an adult can get — but these feelings slowly evaporated, as I thought of the fun that our grandkids are almost certainly going to have in that magical place. Building it is wrong, but it’s right. Times do change. Brains evolve with those cultural changes. Our plastic brains are GOOD at that. It’s not all for the good, but if we’re careful, the benefits probably trump what the modern kid is now missing. In the meantime, here sits grandpa, thinking about where to mount the flagpoles, so that each special little kid can signal when they’re “in residence”, up in the treetops!